Right clicking the taskbar in Windows 7 and selecting Toolbars and New Toolbar will let you select a folder on your computer to add as a taskbar menu. Here’s how to make the label take up less space…

When you create a new toolbar Windows will add the folder name as a label:

I’d prefer it to not take up as much space. Wanting to create a menu for quick AutoHotkey scripts I started with a folder named, simply, ‘Scripts’. Too big.

I thought maybe if I created a folder containing just a space character that would work. Then I’d just have a menu without a label - I don’t really need a label anyway and I’m all for saving taskbar space. But no. Have you every tried creating a folder in Windows named just with the space character? It doesn’t seem to work. It kept being named ‘New Folder’ instead.

Then I remembered an old trick. I can’t even remember what it was for now, but I was using Windows 95 at the time so it was a while aog. I needed to put a space into something but the software I was using prevented it. I used a different character instead; the non-breaking space (Alt+0160 on the numerical keypad under Windows). I gave it a go and sure enough I was able to create a new folder with a seemingly blank character.

So the menu now? 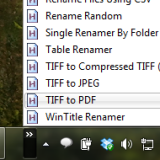